Even under torture the fag shows his sexual nature. 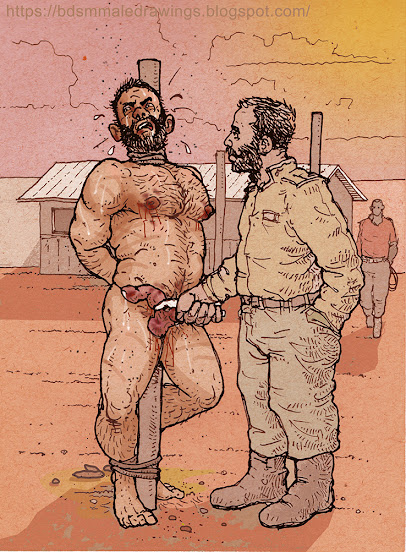 The strong peasant we captured was tortured and raped for days until our captain concluded that he was really innocent, that he had no involvement with terrorists or our enemies.
Now we know what to do with it. If he were released he would certainly enlist among the terrorists. During the tortures, the captain identified the prisoner's vocation as a sexual beast.
The guy was strong, healthy, young, very sexual and well endowed.
For the amusement of the base troops, the captain ordered us to tie him to one of the punishment stakes, as usual, naked, with his hands cuffed behind him, tied around his neck and ankles.
Standing there naked and motionless for days in the fierce desert sun, enduring the cold, dry nights, was already killing convicts in a few days. So we can play and have fun with him for many days. 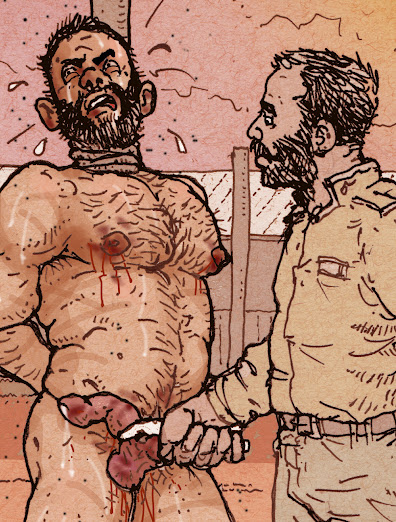 The animal smells really bad, we fed it the shit and urine we brought from the dorm bathroom and poured it in his face.
In addition to his own sweat, vomit, poop and urine.
He was constantly whipped, burned and tortured with cigars and pliers.
Each of the soldiers in the barracks could do as he pleased with the captive.
I especially enjoyed hurting and twisting his huge, tender and soft nipples. When I squished his nipples his dick got hard so I milked him with the pliers until he came. I loved seeing the fag's face expressing pain and pleasure in equal measure.
This type of worm, even being tortured, feels pleasure and ejaculates liters of cum showing its true and filthy sexual nature.
This post shows how much I admire the work of my partners Viste Bear and Jiroh Takahata:
https://twitter.com/vistebear     https://twitter.com/gomunagakun
Posted by POTE at 5:45 AM