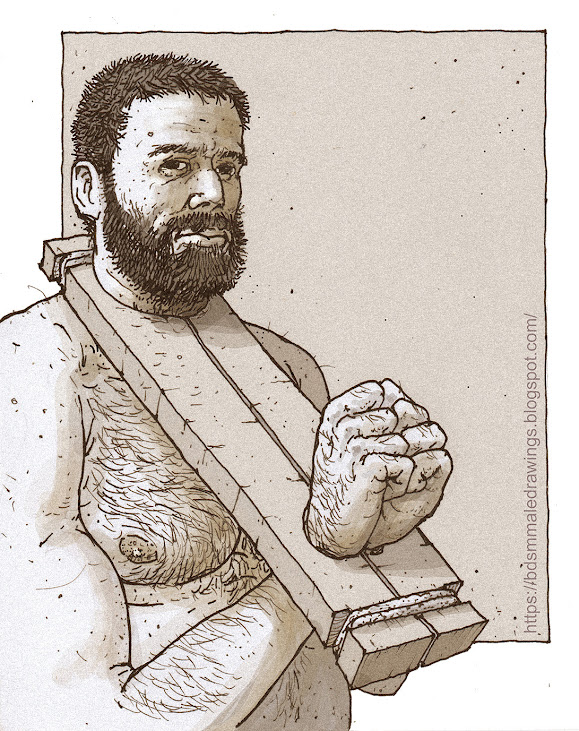 Slaves are beasts of work. Stupid, strong and brutish can do the heaviest and most tiring jobs. Logically these beastly creatures do not have the discipline and commitment they should if they are not constantly motivated and controlled by the foremen, their chains and their whips.
See in the look of this strong animal its indocility, how treacherous and dangerous it is.
For this reason, when the animal is not being used, with its arms and hands to work, these tools must be secured, immobilized, so that they do not threaten the foremen and other beasts.
Slaves and bindings are inseparable. When they are not working they must remain tied up.
Posted by POTE at 6:11 AM 1 comment:

Years ago I made my last choice. 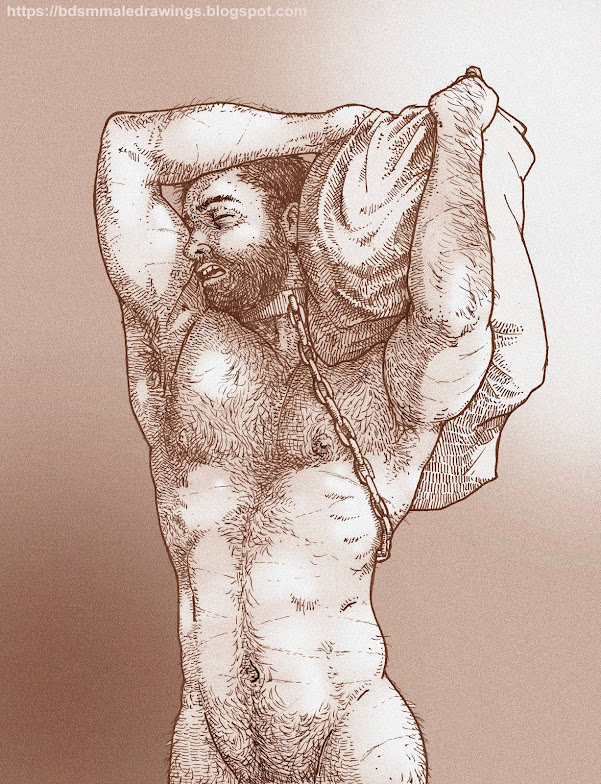 One day, years ago, I made my last choice, I accepted being just a slave.

Since I arrived, I've been naked and chained the entire time. I work all day, in the sun, under orders and lashes.

At night I'm washed, fucked and fed before falling asleep on the hard floor. No one has ever spoken to me again, I don't even know if I still know how to speak, because every time I open my mouth it's just to moan in pain and despair.

My body is all muscle, stronger than ever, hard work makes it stronger, but my leather is covered in marks and bruises.

I don't know how many years I will survive this difficult life. But I can guarantee that, this was the life of my dreams, I was never so happy! 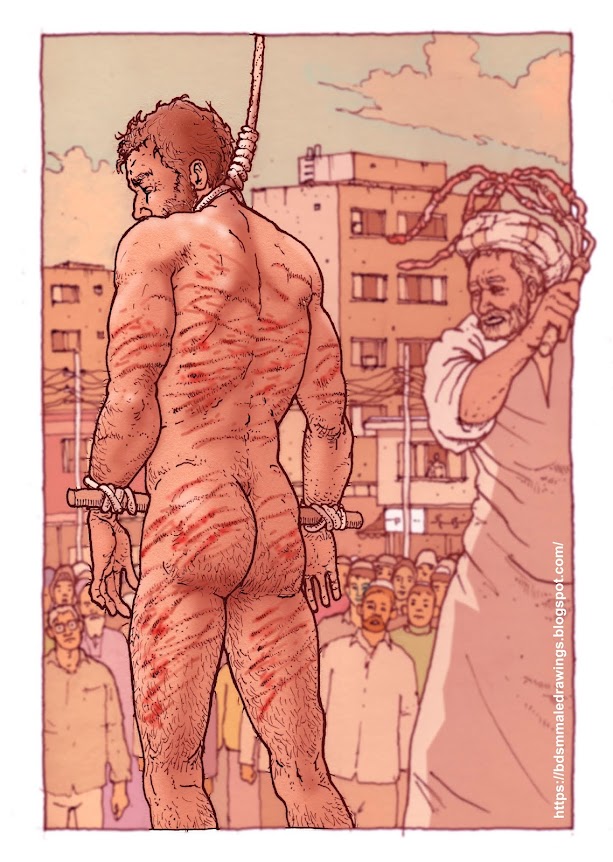 The trial was quick, the miserable foreign boy was accused of prostitution, homosexuality and breaking the law by the Ayatollahs. The sentence was 200 lashes and hanging to death. To make the punishment even greater, the judges ordered him to be executed naked, a humiliating and shameful condition for any God men. As the prosecutor said: may this disgusting infidel be exterminated naked! Naked like an infidel, like a heathen, like an inferior animal, without God, without pride or dignity!
The town square was soon filled with people who wanted to witness the brutal execution.
However, what no one expected is that the condemned was so beautiful, his body so well shaped that aroused envy, admiration, desire and lust in many who watched.
As soon as he was placed on the scaffold and stripped off, he started to get a nice hard-on. When he began to be whipped, even in the face of pain, with each lash his huge cock throbbed with lust and pleasure. His erection was monumental, his cock oozed pre cum that could be seen by everyone, even those farthest from the gallows.
The executioner counted the 200 lashes with cruelty and haste, and as soon as the gallows lifted the beautiful body in the air, the boy had a ultimate prodigious orgasm ejaculating the cum all over the square.
The astonished audience applauded excited.
Nobody could say whether the applause was for the execution or the orgasm.
Posted by POTE at 2:07 PM No comments:

I'm a slut beast, I have nothing, no feelings, just fear and pain.

This summary is not available. Please click here to view the post.
Posted by POTE at 1:58 PM No comments:

The stepfather and the mother, as guardians, signed the judicial authorization to perform a minor surgery, predicting circumcision and vasectomy. 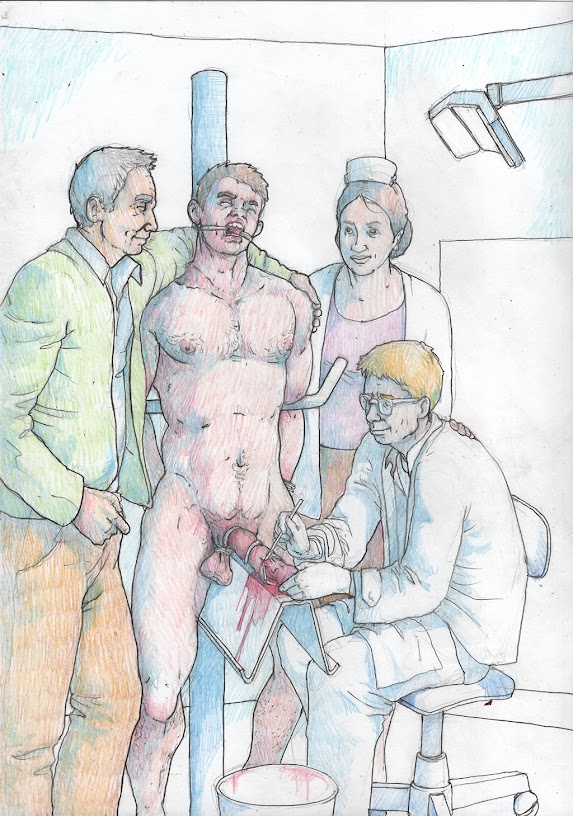 The boy's mother was a celebrity, model and actress, after many marriages gathered a reasonable fortune and now, converted to the church, she became a pastor married to one of the most influential pastors on television. The boy has always been a problem, he over-consumed all drugs, alcohol, pornography and even publicly dated boys and girls.
His mother never cared, she really didn't have any affection or appreciation for him. The new stepfather, on the contrary, saw in him a great problem, a challenge and a great opportunity to promote his church. The stepfather pastor wanted his stepson to become a public success story, an exemplary faithful, devoted to the church. Even though he was twenty years old, due to several convictions for drug possession, drunk driving and assaults, his stepfather managed to judicially interdict him and become his guardian.
The stepfather and the mother, as guardians, signed the judicial authorization to perform a minor surgery, predicting circumcision and vasectomy, "concerned" about the boy's health and to prevent the boy from having bastards who demanded the sharing of the couple's property. But, who took all the steps and followed the process was the stepfather. 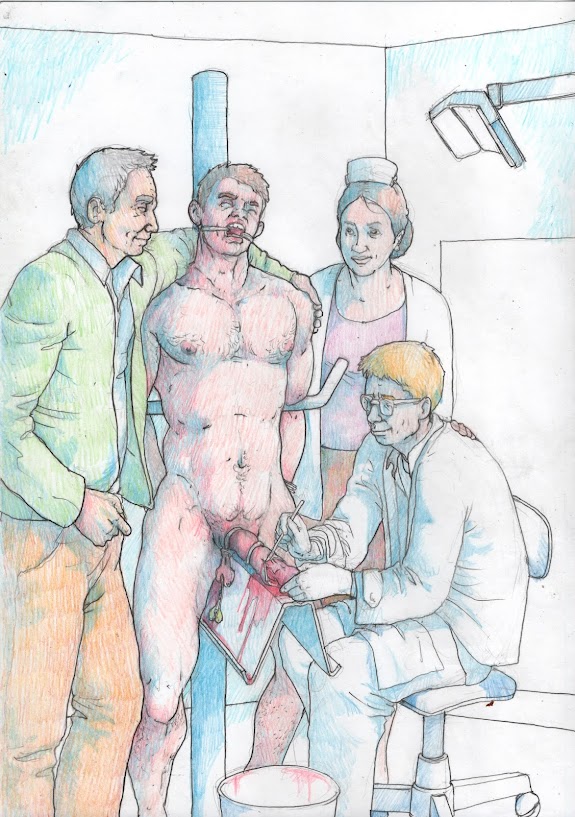 He chose a trusted doctor from the church, a faithful collaborator of the pastors, accustomed to charging a high price to do everything that was convenient or necessary for the institution's interests.
As it was a "minor surgery", it was not necessary to perform it in a hospital, nor the use of general anesthesia. The "careful stepfather" and his doctor friend drugged the boy, to the extent he was able to remain conscious, but he did not complete understand what was going on. The pastor explain that it is necessary for him to feel the pain of the surgery. "God approves that he could pay for his excesses and sins while still alive, for the good of his soul".
The boy was stripped naked and tied upright, with his hands behind his back, attached to the steel device in the office. His beautiful penis was manipulated until it was hard and big, then it was attached to the device.
The stepfather instructed the doctor to undergo surgery that, instead of freeing the head of the penis, would make the foreskin so tight that the boy would never again be able to get an erection, and would feel terrible pain every time he got excited.
Seeing his stepson naked there, suffering, his penis being ruined, the boy crying in despair and pain during the intervention excited the pastor too much. The boy begged with sobs: "please, stop it, it hurts too much!"
The pastor mockingly hugged him "We are making you a holy boy! We are only doing what is in God's plan!"
The doctor laughed at the pathetic situation as he cruelly cut the skin off his penis. His goal was to cause a gross and ugly scar, definitively deforming the cock. 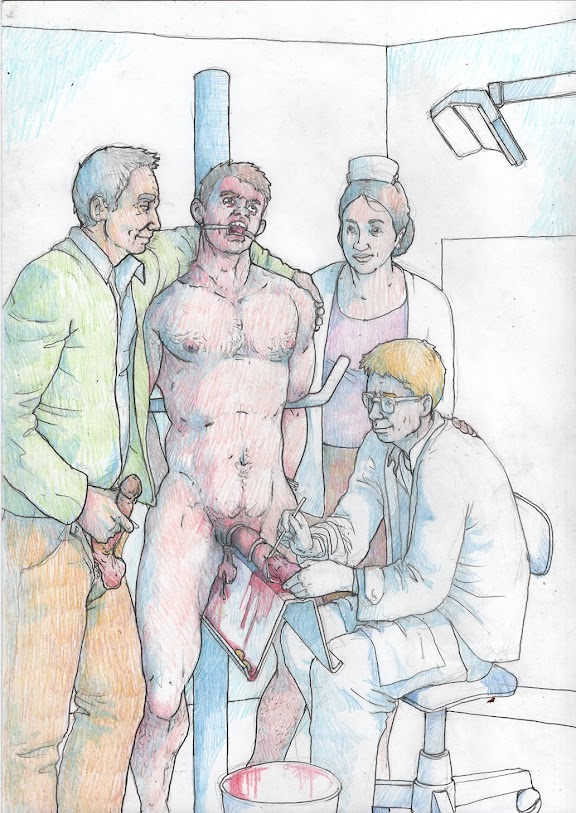 Fag, accept that this is how a slut should be treated! 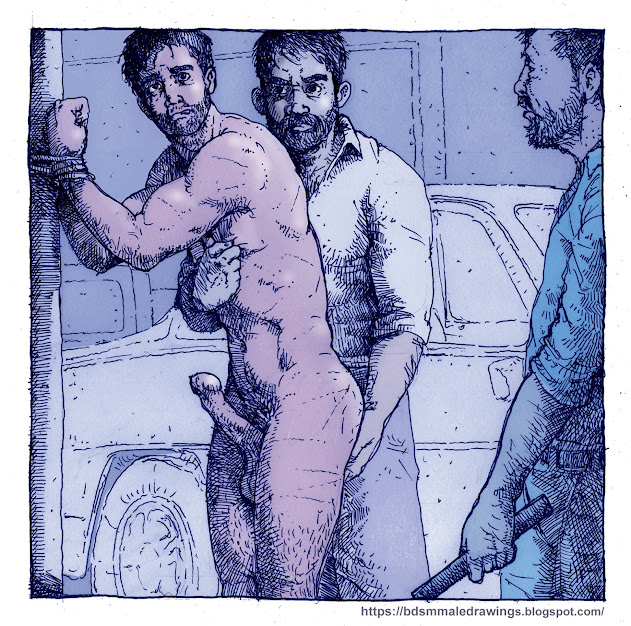 In the company garage, after the fag sucked both of us on our dicks, we tied him naked to one of the columns. He let himself be tied sweetly, without any resistance.

When my colleague showed him the heavy whip, the little fag shook and asked us not to beat him violently. I stuck my finger deep in his ass and violently squeezed his nipple hurting those two most important points on the queer's body. I whispered in his ear:

"Fags like to feel pain, it's in your bitch nature! That's how you slut guys work, the little stupid fag hasn't learned that yet?"

He moaned in pleasure and his cock was instantly hard.

When the first lash bite his back, the fag began to cry and moan. His moans only excited us more, we whipped with cruelty, mercilessly, with violence and cadence.

The wounds soon turned red, then as they opened the blood began to spurt and run down the flesh.

When he was already badly wounded, we took a break to rest.

While the obscene and filthy animal wept silently, I explained to him.

"Bitch, admit you're enjoying being spanked, your dick is still hard and throbbing. We're only going to end this spanking when you come."

We took up the whipping again with redoubled violence, and the bitch soon come and sneezed profusely! 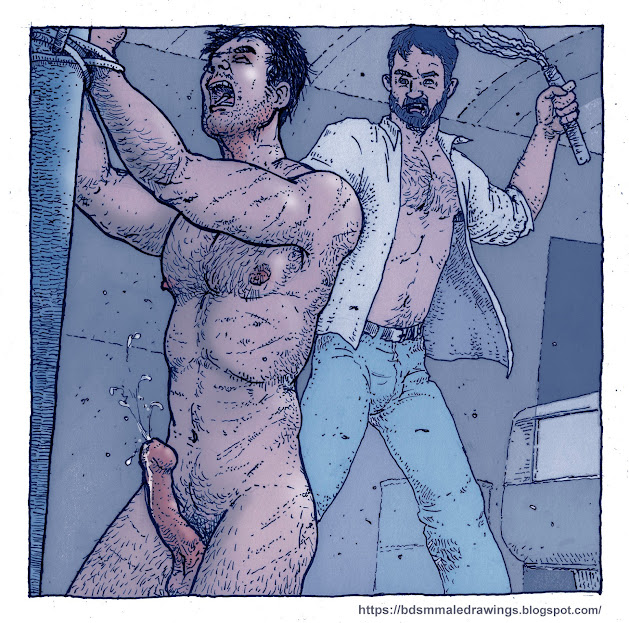 Before untying him from the column, my colleague and I violently fucked him.

As he put on his urine soaked dirty clothes I explained to the asshole.

"You're going to have to go back to your place like that, bruised and filthy, to learn what the fuck you are."

"Only come back here on Monday if you accept that this is how a slut should be treated, ok? I never want to see you in your underwear or socks again, just wear a t-shirt, pants and a hard shoe, understand?"

He was looking at us, listening quietly, his eyes filled with tears.

The fag listened in silence. I continued.

"If you behave yourself, on Fridays, the three of us can have a happy hour like this every week! What do you think of the proposal?"

He, with tears in his eyes, replied.

On Monday, when he arrived for work, I reached into his pants and noticed he was without any underwear.

You guys are in charge, I'm just the dutiful helper here. 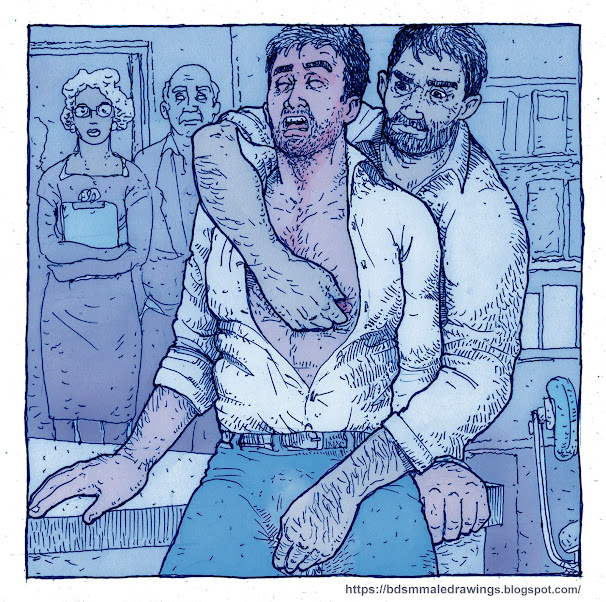 The handsome boy started working at the company as an office assistant, he was young, around 19 years old, very shy and quiet.
He was so discreet that I was the first in the company to realize he was a faggot. When I realized he was gay, I started teasing him, denouncing him, and harassing him, with nasty and rude jokes and humiliations. Every time I passed him, I slapped him on the ass, punched him in the stomach or on the head, aggressively and humiliatingly in front of all his colleagues in the company.
I said - Hey fag, do you want to be beaten today?
In all my teasing he lowered his eyes and silently, resignedly accepted all the bullying he suffered.
He accepted it so passively that I began to realize that he enjoyed being mistreated and humiliated. So I started to raise the tone of evils.
One day in front of everyone I hugged him from behind, slipped my hand inside his shirt and began to pinch, crushing his nipples. The boy didn't do anything to stop me, he just started moaning with lust and getting turned on.
With the other hand I held his cock over his pants and with a few squeezes he just came smearing his sperm pants.
I whispered in his ear: You're a shameless bitch, aren't you?
He, with his eyes closed with lust, replied: I am, I cannot deny nor prevent my bitch nature. 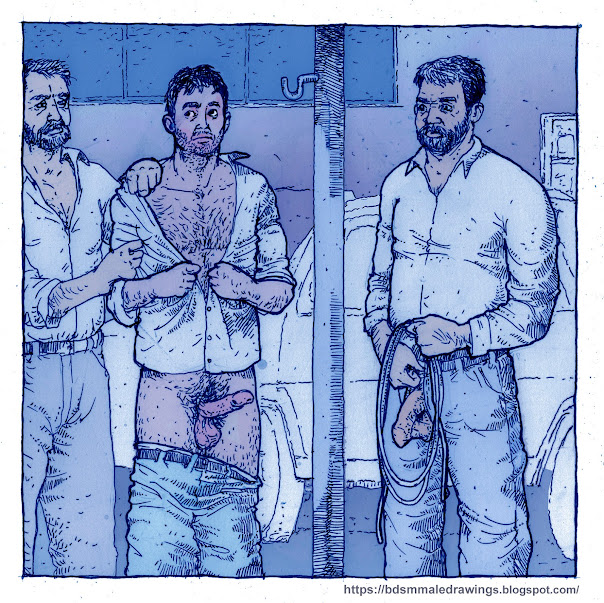 Excited, I told the assistant that he had to meet me in the company garage after hours. I explained: A colleague and I want to use your little body and holes for our fun right there in the garage, ok?
He replied slyly: You guys are in charge, I'm just the dutiful helper here.
After work hours I went to the garage and the boy was there waiting for us.
My buddy and I started messing with him by groping his ass and muscles. He let himself be manipulated and squeezed freely without any reaction.
I reiterated to my colleague: As I told you I found a slut bitch in the office.
I lowered his pants, exposing that his cock was already hard, denouncing his horny at the situation. My colleague started pulling his shirt, and he helped by unbuttoning it.
Before long he was naked and sucking my cock.
I explained to him: Faggot, we're going to tie you up, give you a good spanking and fuck you. If you behave, put up with and please us just fine, we can do this every Friday, ok?
He, without taking my cock out of his mouth, agreed.
to be continued
Posted by POTE at 11:00 AM No comments: