The family was very religious, they go to services every day. The youngest son, from an early age, showed tendencies and behaviors that greatly displeased parents and pastors. That's why since he was little he was beaten violently with sticks, slaps and spankings. However, the more he was beaten, the more he was punished, the more lustful and excited the brat became. In fact, the constant repression and punishment helped to awaken in him all the fetishes of a masochistic and submissive cunt.
The more the family punished him, the more he did to bring about worse, more violent and humiliating punishments. It was evident that he enjoyed being whipped, that he loved being humiliated, and that he would love to be raped. The church pastors, in groups, held "liberation" sessions by spending the night praying and beating the naked young man, suffering the beating all the while with his erect cock ejaculating.
The boy, also very religious, had mixed feelings. He felt guilt and pleasure from sex, pornography, and whipping sessions. He himself, in front of the family, whipped himself in penances until he drew blood from his own back, and then masturbated excitedly with the self-inflicted spanking.
Desperate, he abandoned his studies, devoted himself only to prayers and penances. He repeated that he wanted to follow a religious vocation, that he wanted to be a celibate monk, devoted to God. The more time he had to deal with this issue, the more he accessed pornography, the more often he masturbated, and the more spanking he self-inflicted. Until he had his most exciting idea, his greatest fantasy, of being castrated and becoming a monk. 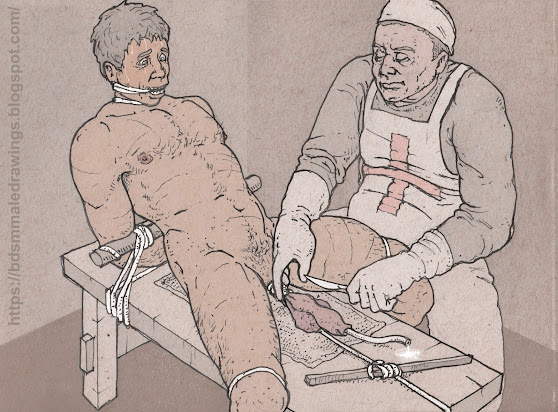 He himself proposed the idea to the family, and wrote a letter to the pastors asking for their support. His parents were against it, but the pastor enthusiastically supported it. It was he, the priest, who organized the entire process.
He held a farewell ceremony for the young novice from his community and family, where he announced that he would be freed from sin and therefore placed in an isolated and closed religious monastery in a southern state. The excited boy signed all the documents, contracts and authorizations, the family at heart was relieved to be free of the problem and the sinner, and happy to receive some money for the "delivery" of the boy.
When he arrived at the "monastery" he soon realized his big mistake in terror.
The place was a large, luxurious house, in a very remote place, where the church kept isolated the most perverted pastors, those already denounced and accused of serious sexual crimes. The first week he was naked all the time, put into orgies where he was raped and had to suck all the dicks of the holy lords. He was abused, whipped and tortured in various ways, he sobbed all the time, but his always hard cock attested that he was as perverted as his tormentors, and that he was loving everything they did to him.
After a week, after lunch, a doctor came to do the job. The various clerics sat in the large room to masturbate while watching the castration. The boy, repentant and frightened, begged not to be castrated, but was tied to a low table in a corner of the room. 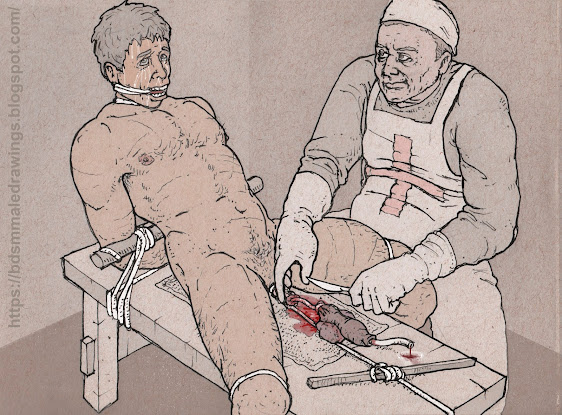 Gagged had his penis handled while the doctor tied and garrote him. Being castrated like that, in public, with an audience of religious people excited by his martyrdom made him come violently one last time.
He was already used to feeling pain, the castration was done without anesthesia, and it didn't even hurt that much. But seeing his penis and scrotum removed from his body, the boy wept and howled in despair.
One of the shepherds approached him reassuring him, "Don't worry, blessed boy, we like neutered bitches, the lack of male hormones will keep you looking younger for a lot longer, and your mouth and ass will get a lot of holy dicks for a lot of and many years".
The boy, stunned, replied "Amen, Father, God willing!"
At that dinner, some of the most devout men got to taste the removed parts of their new bitch, carefully seasoned. 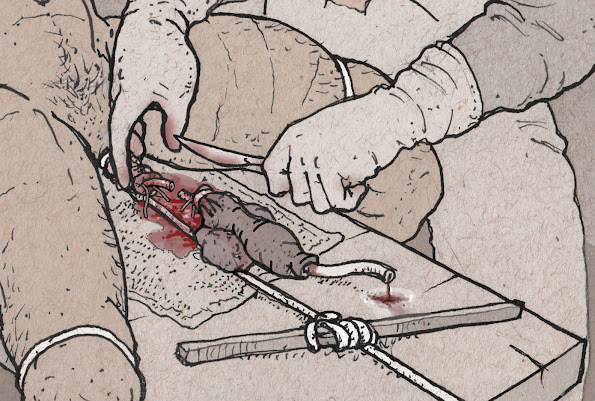