The cart was a form of transportation and punishment. 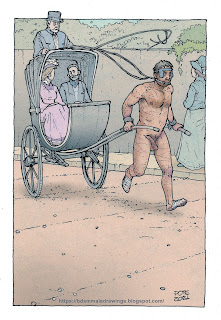 Poor families, indebted to the noble Baroness, were forced to surrender their most mature children as part of the payment and interest on their debts, as slaves. These young men were used for the heaviest and most humiliating jobs, and the most handsome were prostituted and regularly raped. They were always kept naked, chained, and were often whipped and tortured during all season.

The Baroness liked to visit her most influential and wealthy friends, strolling through the Troitskoye in an open carriage on pleasant summer afternoons. The cart was a form of transportation and punishment. She ordered the coachman to be especially cruel and severe with the whip. The naked footman pulled the open carriage, being whipped violently, all the time, all the way. 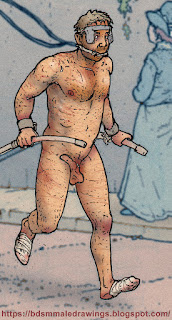 There was no law to prevent this practice, after all the serfs or animals were in the same category, they were just properties of the Russian nobles.
Posted by POTE at 6:19 PM